What Autism Awareness Means to Me

The moment my son was born, and I looked at him curled up in my arms, I felt a love like had never experienced. All of the fear of becoming a new parent washed away as quickly as it had come over me.  My life became focused on taking care of my little boy.

I could tell something was wrong with him almost immediately.   He would not latch on to nurse, which isn’t necessarily all that uncommon.   But I knew something was not right when he wouldn’t latch onto a bottle.   I had no idea what to do.   When he was taken to the doctor they said I would have to feed him with a syringe.  This went on for a couple of months.   Of course I was very concerned, but at that point I was focused on “fixing” the problem. 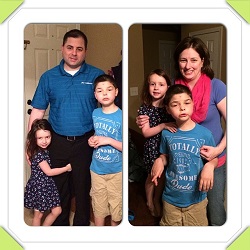 As he began to grow, so did the issues: He wouldn’t hold his head up, he couldn’t roll over, he couldn’t sit up, he could not crawl, and so on and so on.   It finally came time to take him to a neurologist.   They said that he was developmentally delayed.  They said they wouldn’t diagnose him with autism until he was at least a year old.  They recommended speech therapy, occupational therapy and physical therapy. I was overwhelmed not only as a new parent but because I was also new to autism.  I didn’t really understand what was going on with my son.  I was a mix of both scared and frustrated.

Even then, every time I looked at him I could see a beautiful person living inside this shell just waiting to break out. I dedicated myself to making sure he could live a “normal” life.  I could tell that it was so frustrating for him as well when he was trying to communicate with me. It is like he even had the words but just couldn’t express them.

Have you ever taken the time to think about what it would be like if you could not express your wants, needs, or feelings?  Think about it for a minute. You’re at a restaurant with someone and it is lunch time.  You have been hungry for awhile and you know all you want are some fajitas.   You have gone to Chilis and you know that their fajitas are great.  You remember going there and you had them before.  The server comes around to take the orders.  The person you are with orders you a coke.   You would have rather had tea, but no big deal.  You like coke too…and coke goes pretty well with fajitas.  The server comes back with the drinks and asks what you would like to eat.   You realize that no matter how hard you try you can’t express it, the person with you has to tell them for you.   You try and say something like fajitas, but they don’t understand.  You start to get agitated and try to figure out some way to get them to order fajitas.   The next thing you know you are getting a burger and fries…again.  I know it may seem silly, but this is just small example of the bigger picture. This is happening, all day, every day and every time he wants something.   He can’t ever express when something hurts, or if he is cold or hot, or if he is bored, or if he is overwhelmed.  There are a lot of people suffering somewhere on the Autism spectrum that deal with this, and maybe even more, on a daily basis.

Autism Awareness is so important because more people need to understand what individuals on the spectrum go through every single day.   One of my goals is to help people who were like me:  People who have never heard of or had to understand Autism, get a clearer picture of what it is like to have someone close to you on the spectrum.   Another goal is to help these special individuals by providing them with tools and resources that can aid them for a life that is as “normal” as possible.  I believe that the more we spread awareness, the more we can influence those that have the capabilities of solving this epidemic.  Help raise awareness by sharing this blog and others like it with your friends and family.

If you enjoyed this story, don’t leave the website before you sign up for our newsletter.  Our newsletter will not only give you access to stories such as this before everyone else, but also provide you with other resources and opportunities for you to get involved.