People ask me if I knew then what I know now, do I still think I would have chosen to be Quay's mom.  Not many people I know choose to parent a person with Autism.  We have been around many people who do it alone, as one person decided they could not handle raising a person with Autism.  I, however, had God open the door to two boys, who both needed me.  Little did I know that when I decided to follow the pull on my heart that I would find out that I needed them as much as they needed me. 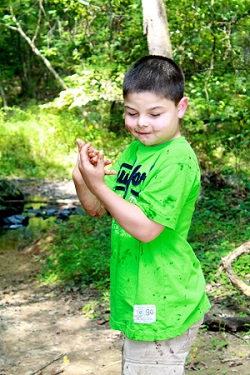 I remember talking to Greg when we first started to get serious about what it would mean for me if I decided to "take on" Quay.   We talked about how Quay primarily lived with him and how that meant that I would be Quay's "mother". I knew that when Greg and I met, and for a long time before that, it was just him and Quay...the handsome dynamic duo. Whoever was going to make it a trio would have big shoes to fill.  Greg knew that there was not only a void in his life, but there was a void in Quay's too.   Greg tells me he knew right away that I was the one to fill the void.  I wanted to make sure that I was listening to my inner voice.  The one that speaks to you when you pray and get quiet enough and have enough faith to listen to the answer.   The voice told me to meet Quay.

The thing that I am most thankful for though, is what Quay has brought to me.  I didn't realize, or maybe what I did not want to hear, was that the voice was telling me that Quay and I needed each other.  I don't know if I have always been the way I am now or if I am the product of the choices in my life.  By the time I met Greg and Quay I had experienced failed marriages, periods of severe loneliness and phases of starting all over again.  That combined with the controlling nature of both of my parents and a touch of their OCD, meant that I was learning to deal again in a chaotic world as a person that was stressed out and shut down by chaos.  I am sure those of you that know what it is like to raise a special needs person or have met my Quay just got a little chuckle.  What I thought I was meeting that day was a little boy who desperately needed a piece of my heart.  Imagine my surprise when several years later I have come to realize what I needed was a piece of his.  I needed him to be the yin to my yang.  I needed him to take me back a notch, to show me how to let go of the box as it might need to fit into a triangle.  He got me to let go of how it should be and learn how to make the best out of what it can be.  Quay pushes me just as much as I push him.  Although the push is hard I like to think that we are thankful for each other through it all because we both know deep inside we need it.

I knew the first day I met him that he and I had exchanged pieces of our hearts.  The piece of my heart that I gave to him came with a push for a my boy to be a fully functioning contributing member of society.  That is what I told his kindergarten teachers when they asked us what our long-term goal was for Quay.  I will never forget that it came with a chuckle from them.  I think sometimes people who know me get that same chuckle when they realize that me, the crazy scheduled, controlling, precise lady, is raising a Quay.  But just as I had tears of determination that day when I told them I was serious and that anyone that was not on that game plan would have to deal with his "momma", I know he has the same drive to make me a silly, fun-loving, enjoy the ride momma that loves freely and blows kisses to those that need it.   What a blessing it is to be his "mother".